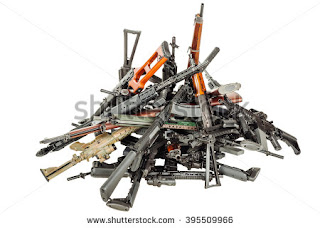 I am practically speechless after another mass murder, this time in a Church.  What are we to do?  The answer to that question cannot be a simplistic one size fits all thing and if anyone else says, "Our thoughts and prayers go out to them, " I will scream.

Of course I do pray every time that these horrors happen and prayer is important, but if it does not lead to action it is in vain.

What actions?  For one thing some level of gun  control and please stop quoting the second amendment.  That misses the point.   Without repealing that amendment limits can be placed on the sale of various weapons.  Shame on the NRA for not realizing that. And please, enough of "guns don't kill, people do"   That is true as far as it goes but it's more difficult to kill scores of people with a knife of some other weapon.

But let's not be simplistic. Gun control laws alone are only part of the fix.  There is a mental health issue as well.  All too many of these murderers have had serious mental health issues. There is no perfect screening system but we can do better.

Deep down, however,  the issue is a spiritual problem that won't be fixed be just saying prayers.  As a country we need to face the level of anger that is about, anger that is expressed not only in shootings but in hate speech, racism and all sorts of phobias around different types of people.  We need to look inside ourselves and ask God to help us heal the deep-seated anger that is in many of us.  We most certainly can and will have disagreements about politics and religion.  This is part of the greatness of America, but we need to learn anew how to disagree without being hateful. Most Americans will never commit an act of gun violence or any other type of violence but I have seen frequent examples of people shouting each other down over all kinds of things.

We in the clergy of all faiths need to address this in our preaching.  We also need to speak out against a distorted expression of Christianity that puts guns, the Bible and the flag all together.

I write these words not as a liberal or as a conservative, but as a Catholic Christian. I also have no illusion that these words will solve anything, but hopefully they point us in a direction