A Revolution in Prayer--Part One of a Series 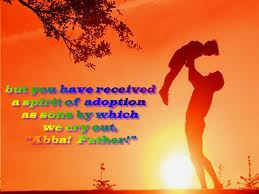 On this past Sunday we were presented with a lesson on prayer, indeed with a veritable revolution on the meaning of prayer, a revolution that is 2000 years old and which we have forgotten as revolutionary.

What  could that be?  Calling God Abba, Father. A little background is in order here.  In the Hebrew Scriptures there are several references to God being like a father to Israel.  The Israelites, however, never prayed to God by calling God "Abba".  That was seen as making oneself too chummy with God.  The divine name was not to be pronounced.  God was called Lord (Elohim) or Master of the Universe, but never "Abba". In the Gospel text for this past Sunday we are given Luke's version of the Our Father, the Lord's Prayer.  The Church very early on adopted Matthew's version. Both are essentially the same.  When the disciples ask Jesus to teach them to pray He gave them and gives us this beautiful prayer which is not so much a formula as it is a way of relation to God.
By telling us to call God Father, "Abba", He is drawing us into the life of the Trinity.  He is telling us that his Abba is our Abba as well, a relationship established at our baptism and renewed throughout our lives.  Ans what does "Abba" mean?  Father, yes, but more. Let me illustrate via an experience I had in Israel when I visited there 20 years ago.

I traveled to the Holy Land with a Scripture study group directed by the Catholic Theological Union in Chicago. As we went about we were often in the vicinity of various Jewish groups who often spoke their native Hebrew language.  On one such occasion a little boy of about 5 years old fell and hit his head on the pavement.  After a period of stunned silence he began to scream and cry, not a pleasant sound, but one that brought relief because it meant that he was breathing.  At any rate as the crying decreased the little guy got his bearings and spotted his father out of the corner of his eye.  Upon seeing his father he got up and ran towards him crying, "Abba, abba, abbaaaa."  His father came running toward him and picked him, embracing and soothing him.

I was taught in seminary Scripture class many years ago that "Abba" meant not only "father" in the more formal sense, but also "daddy" or "papi".  This scene brought that home. That was definitely a "daddy" moment.

So then, in teaching us to call God "Abba" I believe that Jesus wants us to reverence God as "Father", but also wants us to know that when we fall and are wounded we can cry out to our "Daddy" and be picked up in His loving embrace.  I invite you to occasionally when praying the Lord's prayer to begin with "Our Daddy" or dad, pop, whatever word works for you.  I think that might change our image of God and move us away from the old man with the beard image that so many have.

For those who have read my book, The Wandering Friar, this story is told on pgs. 81-82.

Finally, we have only touched on the first line of the Lord's Prayer.  Stay posted for more in the week's ahead.
at July 29, 2013 No comments: Links to this post

What about the Guy that was Helped--The Good Samaritan from a Different Point of View. 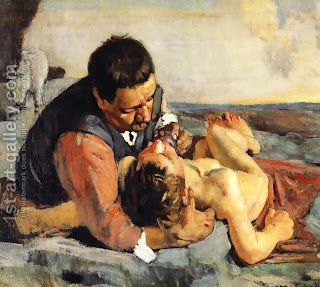 Everybody knows what a good Samaritan is, even an atheist.  That's how familiar Jesus' parables are. Even the non-believers know the stories.

But what of this parable (Luke 10: 25-37) presented to us on this 15th Sunday in Ordinary Time?  How does it speak to us?  those of us who try to take Jesus' teaching seriously certainly try to be good Samaritans whenever the opportunity arises.  We try to help the stranger in need.  We wonder how to help a homeless person if we don't choose to offer money to them.  On this past Memorial Day I tripped on the sidewalk in St. Petersburg sustaining cuts and bruises on my face and hands and any number of "good Samaritans" came to my rescue.  I was deeply touched by that and will .always be grateful to those people.

Being that I was the guy who was helped that day has lead me to see this parable in a different light. We always ask, and we should, "Am I like the priest or the levite, passing by because I am too preoccupied with my own agenda,  or do I help out the one in need?  Might we also, however, ask "What would I do if I were the one in need?"  It is difficult for us in a culture that overvalues self-sufficiency to accept help.  Even though I was so grateful that day after I fell there was part of me that wanted to say, "Thanks, I'm fine. I'll be OK. I don't need help." even though I'm not OK.  We worry about having a sense of entitlement, and we should, but being willing to receive help, receive the gift from another, is an act of humble graciousness, not entitlement.  Peter learned that lesson from Jesus when he first refused the Lord's offer to wash is feet.  He was told, "Unless I wash you you will have no inheritance with me." (John 13:8) In other words he had to learn how to receive the gift that Jesus offered.

There is more to being the one who needs help.  In the parable the man who was robbed was helped by a Samaritan, people who were in conflict with the Jews.  I wonder if the man thought, "Oh my goodness this guy is going to kill me, or rob me and beat me some more."  What a surprise when this Samaritan helped him.  Would you and I accept help from someone obviously attired as a Muslim, or who looked like an undocumented immigrant, or who looked "strange" in some way?

The last challenge is realizing that there are countless millions of people beaten and abandoned by the roadside.  They are the poor and forgotten of this world, the people that Pope Francis calls the marginalized, the people on the outskirts.  These are people that the Pope said are victims of the "globalization of indifference".  Can we at least stand in solidarity with them, share in their vulnerability, realizing that in spite of many differences between us that they are our brothers and sisters and that we are all neighbors as the parable suggests?
at July 12, 2013 1 comment: Links to this post

A Fourth of July Reflection 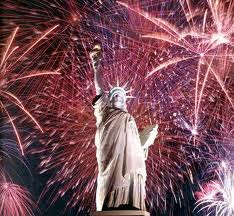 As I look forward to the fireworks display tonight (July 3) in Land O'Lakes, WI--always one of the best I've ever seen, I thought that I might offer a few thoughts on what we Americans celebrate on this day--freedom.

There is a lot of discussion today about different types of freedom, about rights for different groups and about the erosion of constitutional rights.  All of these discussions are vitally important in a free country. People may have different ideas about the issue involved but we as citizens have a responsibility to make our voices heard in all of these areas. I am not going to focus here on this level of freedom, as important as it is.  This freedom I would call civil freedom or freedom under the law. Thank God that we have our constitution and the ability to speak up when we think that it is not being observed and protected.  This civil freedom, however, must be accompanied by another type of freedom. I prefer to call it Christian freedom, though on a very deep level it applies even to the non-believer, so I will call it inner freedom.

This past Sunday's second reading was from Paul's letter to the Galatians.  Here I quote Chapter 5, verse 1 of that letter. "Brothers and sisters: For Freedom Christ set us free; so stand firm and do not submit again to the yoke of slavery."  He later writes in verse 13, "Do not use this freedom as an opportunity for the flesh; rather, serve one another through love."

Our Lord went to the Cross freely. He did so out of love.  That is the deepest and most complete act of freedom ever exercised. The temple leaders and the Roman authorities put Him to death and  tortured Him, but they did not take away His freedom.

This may seem a strange notion of freedom to some, but put simply it means that when I do the loving thing, the right thing, by my conscience, there is no civil authority, even though they imprison or kill me, that can take away my ability to freely choose to do that which is right.  This is the freedom exercised by martyrs and be people imprisoned for their beliefs. It is the freedom exercised by anyone who does good even though they are mocked, rejected and ridiculed for it.

As an aside let me point out that when Paul speaks of not using freedom as an opportunity for the flesh he is not talking about the body  and sexuality necessarily but rather using the word to mean the selfish ego, doing what pleases me rather than what serves others.

One of our problems today is that all too often people want to claim their civil right to do whatever but lack the inner compass to do the right thing, the good thing.  In other words just because the law allows me to do something doesn't mean I have to do it.

So, as we celebrate Independence Day let's rejoice in our freedom. let's use that freedom responsibly and wisely.  Let's ask if I should avoid doing some things even though the law says they are OK, and finally let us have the courage to act correctly even though I may have to pay a price for doing so.

I was going to give some examples of issues that this applies to but I think that my intelligent readers can read between the lines.  I assure you that this is a challenge to folks of all political leanings.