Prepare the way for the Lord, An Advent Message

I was tempted to introduce Advent by offering a comment on the new translation of the Mass texts, but chose to wait until they have been in use for a while. Instead, some thoughts on the season itself.

Most of us Catholics think of Advent as the time when we get ready spiritually for Christmas. That is indeed one of the purposes for the season, and certainly we need to attend to that more often than we do, but it is not the only purpose of this wonderful time.  At the beginning of  Advent the Church's focus is more on the Second Coming of Christ, than on the First Coming.  This Sunday's Gospel (from Mark 13:33-37) Invites us to "Be watchful! Be Alert! You do not know when the time will come." (Mk 13:33)

There is a great deal of sound advice in these words.  For one thing they certainly make it clear that anyone who tries to predict the end times doesn't know what they are talking about.   But how are we to prepare for the end times, for the coming of the reign of God in its fullness?  I believe that the simple answer is to strive every day to be open to the many ways that the Kingdom of God breaks in upon us every day.  In Luke 17:20-21 Jesus tells us that  "The Kingdom of God is in your midst."  What this basically means is that we who believe, insofar as we live the Gospel, carry the reign of God, the Kingdom within us right now.  Yes, it won't come about in its fullness until the end times, but even now the peace, justice and love that characterize that Kingdom are in us and around us.  This is indeed a big part of the source of Christian hope.  It is easy to get bogged down and depressed by the evil in the world, and there is plenty of that.   I think that a wonderful discipline for Advent, and Advent type of penance if you will, is to pray every day that our eyes might be opened to see the Kingdom breaking forth around us, and secondly to do our part to help build that Kingdom.  We by our own efforts do not hasten the coming of God's reign, but insofar as we cooperate with God's grace to do the things that make the world a more just place in which to live, by helping to overcome divisions between people, by seeing that life is respected in every way and by caring for this planet that we inhabit we cooperate with God's plan to bring about that Kingdom.

As Advent comes to an end and changes focus on December 17, looking to the coming celebration of Jesus' birth, we can truly have a wonderful Christmas if each one of us can say that we spent this Advent season preparing the world for His coming now and in the future and if we strive to let him be born into our own hearts today.

We Franciscans are proud of the fact that St. Francis, near the end of his life, recreated the Nativity scene with live people and animals in the little Village of Greccio in the Rieti Valley of Italy.  This wonderful celebration inspired the many Nativity scenes that we all have in our homes today.  Interestingly enough however there was no baby in Francis re-enactment.  Why?  Because Francis, in whom it was said that Christ came alive in his arms, wanted those who were there and who later would hear of this event to see ourselves as the manger in which Christ is born over and over again.   May He be born in all of our hearts this year.

Feast of the Dedication of the Basilica of St., John at the Lateran--A Feast of the Church

Today the Church celebrates what for many is an unusual feast, the dedication of the Basilica of St. John Lateran in Rome.  This basilica holds a special place in Church history, Franciscan history and in my own heart. Back in 1999 our Minister General, Fr. Giacomo Bini, OFM sent a latter to the friars of the order asking for volunteers to serve as confessors for the Jubilee Year 2000.   The Roman basilicas are staffed by the diocesan clergy of Rome, but each one has a staff from members of different religious orders as confessors, the reason being that we can bring in people from around the world who speak different languages.   We Franciscans have been assigned to the Lateran because it was there that Pope Innocent III approved the rule of Francis and his brothers. Ability to speak Italian as well as 15 years of ordination were two of the requirements to supplement the full time team of confessors  there so  I signed on and was accepted. I spent just about 7 months in Rome that year and it was a wonderful experience.
The basilica, shown above, is the oldest standing Christian Church in the world, built by the emperor Constantine on land given to the Church by the Laterani family in 324.  It (and not St. Peter's) is the Pope's cathedral as Bishop of Rome, and for centuries the Lateran, not the Vatican, is where the pope resided.For a fuller story on this great church you can click on this description from Wikipedia--St. John Lateran--Wikipedia
From June of 2000 until early January 2001 I was hearing confessions there of people from all over the world.  I also lived with friars from many different countries as well.  As time went on the basilica continually intrigued me.  Artistically it is eclectic with all sorts of art styles  and most of the works truly beautiful.  In time I realized that this wonderful house of worship was a microcosm of the whole Church.  As you enter you see large statues, six on each side, of the twelve apostles. (See picture to the right above)  There is a beautiful mosaic behind the main altar.  On the left side one finds the confessionals--8 of them, where we Franciscans serve.  In the middle is the main altar where beautiful solemn liturgies are celebrated.  On the right there is a large side entrance, a gift shop and a starting point for guided tours.  There are many small chapels on both sides including one with a Pieta', not the famous one by Michalangelo and not as beautiful, but significant because many people come there to pray for healing. In the Blessed Sacrament chapel to the rear of the basilica one finds the white "cathedra" or seat of the pope as bishope of Rome.
Reflecting on all of this one sees that saints, sinners, seekers and doubters, the pope, bishops. priests religious and laity all gather here at various times.  This is truly the Church. This is who we are, indeed even at simple, small parish Churches.   The Church is indeed, as today's second reading says, made of living stones. 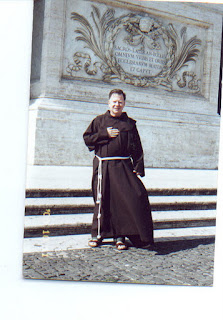 The Way, A Movie for All Saints Day 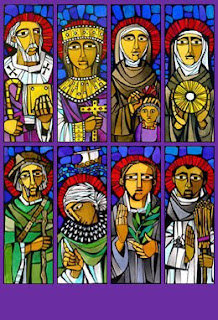 In these early days of November we Catholics, and many other Christians as well, observe two feast that focus our attention on the next life--All Saints Day and All Souls Day.  I find it interesting that in my case anyway some of the same people that I honored as saints in my own life I prayed for on the next day, because after all we are not certain and in some way all of us are both saints and sinners.
Often, as we look to the next life, we don't stop to reflect on the fact that whatever happens in the hereafter is based on what we do now, on our response to the call to holiness which comes to us through our Baptism.  What do we do now, in this life, to grow into sainthood.

All of us are made saints (holy) the moment we are baptized.  It's what we do afterwards that changes things one way or the other.  I remember having this fact brought home to me very clearly back in 1978 when I was on an extended pilgrimage in Rome and Assisi.  We visited the cathedral of St. Rufino there and stopped by the baptismal font where it was noted that about 10 different saints and blesseds were baptized there.  Once we were duly impressed with that our guide pointed out that after our own baptism each of us had the same grace as those saints. (See the short video clip of this below, taken in May, 2011)

So how do we grow in holiness in this life?   An obvious answer for starters is through prayer, and indeed without a strong relationship with the good Lord we don't grow in holiness.  But prayer alone is not enough if we don't make changes in our life.  This message came across loud and clear in a wonderful movie I saw the other day--The Way, starring Martin Sheen.   In this movie the four main characters are making a pilgrimage, walking over several weeks a 500 mile (800 km) trek to the shrine of Santiago (St. James the apostle) de Campostella in Spain, departing from a small town in France.

None of the characters have a highly religious motivation for making the journey, but deprived of the ordinary creature comforts of their everyday lives,  thrown together with each other, and not always happily so,  they are forced to confront their weaknesses and shortcoming which become unmasked by the stress of the journey.  By the time they arrive at Campostella they are transformed, perhaps not ready for canonization, but transformed nonetheless as they fall on their knees at the shrine of the apostle.

I highly recommend the movie which, to use the parlance of the day, is much more about spirituality than about religion, and hope that it might move you, as it did me, a bit closer to sainthood.
at November 02, 2011 1 comment: