The Assumption of Mary: Hope and Challenge 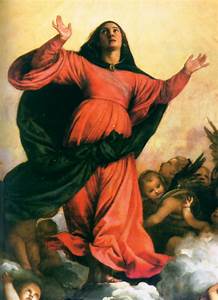 Today is a big day for me and for the Church, the celebration of the Assumption of Mary. 55 years ago today I put on the Franciscan habit for the first time. A year and a day later I took my first vows on August 16, 1964.

Now that that has been stated some might be thinking that I am out to lunch and out of touch.  With all that is going on in the world and in the Church what meaning could this Feast have? My answer--a great deal of meaning.

The belief that upon her death the Virgin Mary was taken body and soul into heaven, though declared a doctrine by Pope Pius XII in 1950, is a belief that has been shared since the earliest days of the Church.

What this doctrine gives us is a sense of the beauty and dignity of the human body.  What Mary experiences immediately we believe and hope that in the fullness of time we too will experience not just the salvation of our soul, but bodily resurrection and redemption.

There is so much violence in our world--war, terrorism, abortion, abuse of women and children, sadly the latter by priests bishops and cardinals.  The hope of this feast is that in God's time the ravages done to human bodies (and spirits) will be healed.

Fine and well, but what about now?  That is where the challenge comes in.  If we believe that God became enfleshed in Jesus, and that his mother is taken to heaven body and soul, we cannot see the body as rubbish, as OK to damage.  We cannot see the body and human sexuality as dirty.  We must seek justice and healing for everything that attacks the body or misuses it.  That is why our Church teaches respect for human life from conception until natural death.  That is also why we need to clean up the mess that does not seem to go away with the sex abuse crisis.  Bishops and priests must be held responsible.  Consequences must be meeted out even at the highest levels and lay people, not clergy, must lead the investigations.

A radical sense of the dignity of the boy has been growing in the Church.  That is why Pope Francis has said that capital punishment is not acceptable, nor is human trafficking or violence in any form or any attack on human dignity.

Finally this belief calls us to develop a healthy sense of human sexuality.  Over the years we have been bouncing between rigidity and Puritanism to the hedonism and anything goes mentality of today.

I have touched on a number of issues here. To be sure a more nuanced approach to all of them is necessary.  I just have sought to name to issues and to say that underneath it all we need to realize that our Redemption in Christ is not just spiritual.  It is bodily.
at August 15, 2018 No comments: