This Sunday's Gospel text (Luke 12:13-31) is certainly an apt one for our times.  We are all concerned about the violence in our own country, but indeed around the whole world.  Pope Francis has on several occasions suggested that we are in a piecemeal world war, not like the two previous world wars with clusters of nations opposing each other, but rather conflict spread throughout the world involving different sets of adversaries.  The other day, at the World Youth Gathering in Poland His Holiness said that while the world is at war it is not a war of religions, but of money resources and the domination of peoples.

Some may take exception to his statement citing the obvious connection of violent Islamic groups to religion, but at a deeper level the Pope is right.  Many of those groups are using religion to lay claim to power, control and money.   There are other wars besides the terrorist attacks, Russia and Crimea and the Ukraine and the various outbreaks of violence in Africa.

The above mentioned Gospel text can inform us on what can be a Christian response to the present situation.  The parable in this passage tells of a man who tears down his storage barns and builds larger ones, thinking that this will provide security.  Jesus, in the end, warns about those who store up treasure for themselves and ignore the things of God.

For me this parable leads into a dimension of Catholic social teaching that has found its way into legal practice around the world and which is also explained by some of the great theologians of the ages like Thomas Aquinas, that is what is called distributive justice.  This is not the justice of individual rights, but one which says that if an individual, a group or a nation possesses so much wealth that some people do not have access to the basic necessities of life, then there is a situation of injustice.   For the untrained mind in these matters this can sound like a promotion of socialism.  It is not. It is not saying that everyone should have the same amount of goods or that the government should own and control all means of production and distribution of wealth. Both Catholic theologians and secular legal experts recognize the right to private property, with limitations, and the need for some to have more wealth because they do things like employing people and serving the common good in some way.  Distributive justice does mean that both local, national and world governments and institutions should develop a system where everyone has a fair chance.  In my own experience of working in some very poor countries I have witnessed hard working people who just have no chance of working their way out of poverty.

When this happens people get angry and are prone to act violently.  Pope Francis is correct in saying that this is at the root of so much of the violence we are experiencing.

I do not offer this reflection as some sort of simplistic,naive thought that this solves everything, but I offer it as food for thought in discerning what is the best path politically and economically for us to take.

Below are two websites that may be helpful to those who which to explore more about this dimension of Catholic social teaching.

Who is My Neighbor? A Different Slant. 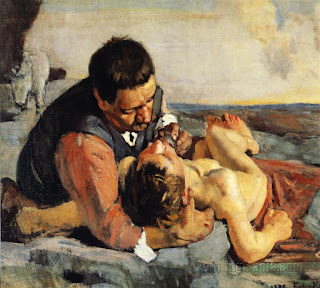 This Sunday's Gospel text is the well known story of the Good Samaritan. (Lk 10:25-37) This is one of the most well-known stories in the Bible, one that is familiar even to many non-believers.  Most preachers, myself included over the years, focus on the priest and the levite who pass by and then on the Samaritan, the outsider, who proves to be the real neighbor. There is indeed a powerful message and a deep truth in that perspective.  I would like to look at this parable, however, from a different point of view, that of the man who was beaten and robbed, the man in the ditch.  Who was/is that man?  I would suggest that he/she is every person who suffers, especially those who suffer violence. Put into today's context that person is the victim of ISIS, the victims of the Boston Marathon bombing, the victims of police brutality (Of course I know that most police are not guilty of that), police themselves who have been shot and killed, Muslim victims of ISIS in Istanbul, indeed all the  victims of violence, war, crime and terrorism, then we can add women and children who have been raped and abused. Add to that list those who suffer from sickness of every kind.  Look into that ditch and see all of them.

Think now of the man in the story.  He is on the road to Jericho, in the desert where there are more robbers and wild animals.  His brothers in faith have walked by.  He fears dying.  He sees a Samaritan, an outsider, from another religion.  He must now be terrified, but it is the outsider who provides help and healing.  That outsider, the story tells us, has compassion. Maybe the Samaritan has suffered himself.  Perhaps he knows what it is like to be "in the ditch".  Have you and I been "in the ditch"?

Again, look at the cross.  See compassion!  Be compassion!  That is what is needed today.
at July 09, 2016 3 comments: Links to this post