Out of Silence, Bread Blessed and Broken 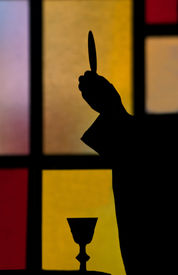 It has been a few weeks since I posted on this blog.  I have not felt inspired to write even though I have had any number of thoughts about things such as the upcoming election, violence on our streets, terrorism, etc., etc.  Many others have spoken on these topics, some in a very  insightful manner, others just ranting and raving from both the left and the right.  Quite frankly I have been dumbfounded by it all, but nonetheless carrying all of this and all of the suffering involved into prayer.

Suffering.  Inspired by pope Francis and his reflections on mercy I am starting more and more to look at every situation and every person not first of all by are they right or wrong, though that is important, but by how they are suffering.  It is by accompanying then in their pain and suffering that they are possibly lead to Christ.  This applies to individuals as well as to groups.  It is unhealed pain and suffering that leads to irrational outbursts of anger and to violence.  We can and must talk of political and military responses to many of our problems.  Politicians, soldiers and diplomats can do that, but as Catholics, as Christians seeking to find the path to healing the pain is our main task.  With that in mind I was deeply moved by the following piece that was handed to me by a religious sister on a retreat that I gave last month in Cincinnati.  It obviously applies to priests and the special gift we have have celebrating the Eucharist, but in a broad sense it applies to all of us.  As you read it, and ponder it, I invite you to reflect on how it applies to you, to those around you and to our suffering world.

The days you spend
bending over bread
are spent
around a mystery of fraction.

If you are indeed broken,
you need to gather up
each others fragments gently,
and remember how,
again through you,
He feeds so many
with so little

To be broken is not only to suffer, but also to break open our hearts in love. In Christ, in the Eucharist we are united to His suffering and we hold also the suffering of others, because He is holding it as well.
at September 23, 2016 1 comment: Links to this post

Emmanuel, God With Us