Here's praying that all readers of this blog have a Blessed and holy Christmas. For my Christmas message please click on Christmas Message When you get to youtube just click on the big arrow in front of my picture. 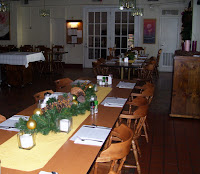 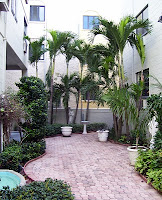 Here are some more pictures of our friary to go with the one below. You can see here our nativity scene, in pre-Christmas mode, our dining room, the beautiful courtyard, the envy of our friends up north at this time of the year and three paintings--of SS Anthony, Clare and Francis done by our resident artist, Miguel Loredo, OFM
at December 20, 2009 No comments: Links to this post

Christmas at the Friary

Several folks who follow this blog have asked me about St. Anthony Friary where I live. I have included a few pictures to give you an idea of what it's like here. One picture shows the outside of our newly painted friary. The beautiful Christmas tree is the work of the vicar of our community, Bro. John Capozzi, OFM., who works hard to keep our place looking great year round. John had the help of several friars in this effort completed at the house tree decorating party. The other shows the entryway with Christmas decorations.
For me the friary really is home. As the title of this blog suggests I am indeed the wandering friar, but as much as I enjoy my travels I find it so important to be rooted in my life here. It is always great to have brothers to come back to after a couple of weeks on the road. The fact that our daily routine is built around prayer and the Eucharist is vital to my life, as well as the interchange with the men here who have spent many years serving God's people in parishes, schools, foreign missions, military chaplaincy and much more. The word friar, by the way, means brother. In his testament St. Francis writes, "...and the Lord gave me brothers." To be brother to each other and to those we serve is at the heart of our Franciscan life. As Christmas approaches I'm grateful for the brothers that the Lord gave me, and I want you to know that by calling myself the wandering "friar" I am always, even when alone, part of a family of brothers who help to shape who I am, and who support me in so many ways in all that I do.
at December 20, 2009 No comments: Links to this post

Our Lady of Guadaloupe

Those who know me well hopefully know that I am a man of faith, but also a skeptic when it comes to things like apparitions. I generally believe that the presence of God is all around us and that as Catholics we have as well the Eucharist and the other Sacraments in which the Lord is present to us in various ways, and thus ought not to be looking for special apparitions and divine interventions. That having been said I must say that my experience with Hispanic people in my travels with the Ministry of the Word over the past few years have given me a deep appreciation for the upcoming (Dec. 12) feast of Our Lady of Guadaloupe. While scholars debate the details of exactly what happened there I am convinced that the event was "of God". The reason I say this is because in the conquest of 1521 by the Spaniards the native peoples were nearly exterminated. Even Church officials were debating whether they had a soul, as inconceivable as that is to us. Then, a short while later, Our Lady appeared to a young native boy named Juan Diego. Not only does this event impact this young man, but his people turn to Christ and the Church starts looking upon them differently. As they say, the rest is history. His people are now impacting the Church in our country, which I also think is "of God."

So ask, if you will, did she really appear? Whatever happened God certainly acted on behalf of a downtrodden people. Our Lady of Guadaloupe, pray for us.
at December 10, 2009 No comments: Links to this post

It's Advent, Hurry Up and Wait!

Some of you may remember that back on October 20 I was surprisingly moved by a visit to a community of cloistered hermit sisters in New York state. Part of the spirituality of these women and their male counterparts is an attentive waiting for the coming of the Lord. It's Advent now and many Catholics don't realize that this season is not only about preparing for Christmas, but about preparing for the coming of the Lord.

For those of us who are in the rat race and not spending our lives in solitude on a mountain top we might wonder, "What can we learn from these hermits?" I think that there are several things we can learn. First among these is the need to slow down. We live in a face paced society and certainly benefit from the speed and convenience that technology brings us. I myself marvel at how I can be in Kentucky where I am working this week and book three parish missions for next year via my cell phone as a road in here from the airport. This is all well and good but there are some things in life that do not have a quick fix or solution and we become frustrated, at least I know that I do, when things cannot get done in a hurry. So one Advent discipline in which we might engage is to slow down a bit, taking time to "smell the roses" and maybe to encounter the Lord in the slower pace. Many of you know that I love baseball and other sports. I can remember going to games back in the 50's and 60's and actually having conversations with people between innings. Now there is deafening thumping of music that prevents that. We need silence to listen to God but also to one another. We spend a great deal of time talking and twittering, but do we really listen to each other any more.

Finally we can learn that waiting on the Loird produces joy. There are all kinds of fundamentalist fear mongers wanting us to tremble because the world might be ending, and in the secular world there are movies like 2012 with its big earthquakes and tsunamis. Our faith does not call us to believe in the world's end, though that is inevitable, but rather in the coming of the Kingdom which we wait for, as we say in the liturgy, in joyful hope.

The Lord will come again in the fullness of time. If we are ready for the many little ways in which He comes every day. The big coming will take care of itself.
at December 05, 2009 1 comment: Links to this post