I'm sitting at a desk at our friary in Boston on Thanksgiving morning and thinking of the many people and things that I am thankful for on this day and hopefully we are all doing that. Thinking, however, beyond the obvious things to be thankful for I think back to a meeting a few years ago with a brother friar from Africa who was visiting the US. I asked him what his impressions were of our country, and they were positive. When I asked him what most stood out to him about life in our country he told me that all the buildings of New York, the technology that was available to us were not unexpected discoveries, but he couldn't get over the fact that we used the same water for bathing as we did for drinking. In his country drinking water was a precious commodity. A friar visiting from Bolivia where i served as a missionary told me once that he couldn't get over mailboxes on the street and that we Americans trusted enough to drop our mail and them with the assurance that the mail would reach its destination without being stolen.

These two little encounters, I believe, challenge us on this day to ask if we are thankful for the things we take for granted in our country. They challenge us to look beyond the sense of entitlement which affects all of us and to see all of life as a gift, and so to be thankful for everything.

The Mass that we Catholics place at the heart of our life of worship is called Eucharist, which is Greek for "thanksgiving". As I celebrate Eucharist later this morning I will thank God for everything that is gift in my life. I pray that all of us in our own way do the same.
at November 26, 2009 1 comment: Links to this post

Our Church's liturgical year comes to an end this Sunday with the celebration of the feast of Christ the King. What an unusual title in this era when there are no kings and queens, though there are still plenty of dictators,and others who abuse authority. Let's face it though Christ the President or P{rime Minister just wouldn't cut it.

Actually the word King means Messiah or Anointed one (Cristos in Greek. What we are celebrating is our belief that Jesus is the fulfillment of the messianic promises of God to Israel, yet not in a way that any of us humans would ever have imagined because He is a King who rules by love, who "came not to be served, but to serve, and to give His life as a ransom for the many." (Mk, 10,45) The Kingdom that He came to establish is one of love, justice and peace, one where the poor have the Good news preached to them

And so we might ask, "Where is this kingdom?" The easy answer is to say that it is in the future, at the end of time, in the next life. True enough this Kingdom will be brought about in its fullness at the end of time, but it is already here as well. It is here whenever the message of Jesus is lived out, whenever there is forgiveness, whenever the poor and hungry are cared for. One biblical scholar suggests that rather than referring to the "kingdom of God" the texts of the Gospel would be better translated as "the ruling of God," so that we could say that whenever it is apparent that God is ruling over our lives God's kingdom is among us.

This beautiful feast goes back only to 1925, though Christ has been referred to as King from earliest times, including the dialogue with Pilot in this Sunday's Gospel text (Jn 18, 33-37) where Pilate asks Jesus. "Are you the king of the Jews?" the feast was established by Pope Pius XI to make a statement of fascism and communism as well as secularism which wanted to replace Christianity with their own political philosophies. Though many things are different today than they were in 1925 the purpose of this feast is as timely as ever.

Thus the question that we all might ask as we celebrate this feast is "Who, or what, is ruling over my life? On what is my life based? What give meaning to my life?
at November 19, 2009 No comments: Links to this post

An Article on my ministry

Fr. Roy Gasnick, OFM, a membger of my community here at St. Anthony Friary, recently interviewed me about the Ministry of the Word. Since many of you often wonder just what it is that I do I thought that you would enjoy the article. Just click on the following and it will take you there. http://www.hnp.org/publications/hnp_today_view.cfm?iid=135&aid=2806
at November 16, 2009 No comments: Links to this post 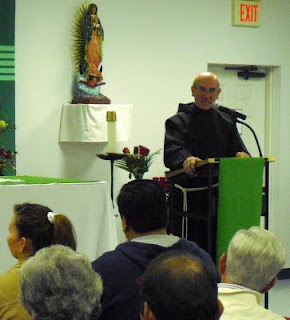 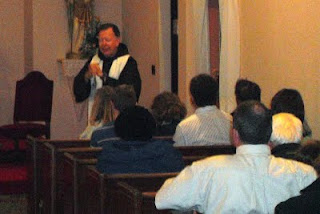 In the pictures above you see Fr. Marty (top) preaching in Spanish at SS. Mary & Edward in Roxborough, NC. Below, Fr. John is preaching in English.

I've just returned from a busy period in my ministry--four missions in six weeks, two of them bi-lingual missions with Fr. Martin Bednar, OFM. During that time I also attended the "Encuentro" for Hispanic ministry in our province of which I wrote in my last blog entry. Several of you have asked questions about these missions, basically asking what we do and why. The "what" part is easy to answer. We arrive at the parish on Saturday in time to preach an invitational homily at all the Masses, Spanish and English. On Monday, Tuesday and Wednesday evenings we divide the folks into two groups according to language, the larger one meeting in the Church (and that's not always the English speaking group), and the smaller one in a chapel or hall nearby the Church. Each group hears the Word of God in their own language. Both of us speak Spanish and so we alternate between groups on each of the nights. In this way everyone gets to hear both of us. At the end of each evening we bring the groups together for a common bi-lingual activity of prayer and ritual. Our efforts have proved successful and have helped parishes to work with the tension of trying to serve the two groups.

The "why" part of the inquiries is more complex. The basic answer to "why", of course, is that there are two languages being spoken and that the needs of all must be met. We run into issues however in two areas. One is that often the English speaking feel that the Spanish speaking are taking over their parish, a parish which they and their parents and grandparents helped to build. The other is a concern that many of the Hispanics are illegal immigrants. To both of these concerns we offer a gentle, but clear and firm challenge. Our forebears did not build, at great sacrifice, an Irish or Itlaian or Polish or American parish. They built a Catholic parish and the Hispanics who come are indeed Catholic and usually very good Catholics. Also I like to tell them that while they may be illegal according to civil law they are "legal Catholics" because they are baptized and that while they are hear they have a right o have access to Mass, the Sacraments and all aspects of Church life. Although we don't give any talks on immigration reform we often point out to individuals what the Church's position is on that subject.

One final point is that it is not only a matter of language, but of culture. Again, as I pointed out in last weeks's entry the mission of the Church is not to favor any one culture but to see that the Gospel is proclaimed and lived in every culture. There is one faith, but many cultural expressions of that faith. Over the years, long before experiencing the cultures of different Spanish speaking countries, I was enriched by the ways in which my Irish grandparents expressed their faith and then discovered that people of Italian, Polish and other ethnicities had their cultural expressions as well.

A final note. The Church in our country today also has large groups of African Americans, Haitians, Philipinos and Vietnamese, just to name a few, all working to maintain their faith, in a manner compatible with their culture. For those of us who are English speaking white Americans our job is not to get them to be "just like us", but to support them in living their Catholic faith in ways that are meaningful to them. This is a challenge for all of us.
at November 06, 2009 No comments: Links to this post