Jesus Withdraws and Prays--Me Too

“Now in the morning, having risen a long while before daylight, He went and departed to a solitary place, and there He prayed.” (Mk. 1:35)
A close reading of the Gospels shows us that there were several occasions during Jesus" ministry where he withdrew and prayed.  Often it was the demands of ministry, after preaching and working several miracles.  Other times it was because he was not ready to fully take on opponents like the Pharisees. (Of course, He often did take them on.) Other times it was to pray for direction and strength.

If Jesus had to withdraw and pray why not you and me?

I have just completed a very busy and rewarding time of preaching sandwiched around a wonderful but busy vacation with friars and with my family.  I am also at a loss for what to say about the goings on in our nation.  As I headed back from a preaching engagement for Unbound in Chicago last weekend I realized that I needed to withdraw and pray and reflect.

Most of you know that I am active on social media, especially Facebook.  One good friend of many years, noting my active schedule,  has several times complemented me for my boundless energy.  Indeed the Lord has blessed me, at the ripe old age of 72, with a great deal of energy and strength.  For this I am grateful, but the supply of energy is not infinite, thus the need to slow down.  Also, as mentioned above, I am concerned about the direction of our nation, not only as regards what can only be called a circus in Washington, but also the many inanities that I observe happening in the general population.  I often feel compelled to make statements on this blog or in the aforementioned media, but find myself at a loss for words.  I get tempted to join in the angry rants but realize that this is foolishness.

Fortunately, by the grace of God, I was scheduled for some minor surgery yesterday, the removal of a large cyst from my upper back.  The procedure went very smoothly, but the followup requires some slowing down.  I see this as a call to prayer and reflection.  I have a light ministry schedule this month, several weekend engagements but much time at home here at the friary.  I hope to follow the Lord's example and withdraw from the frey a bit to pray and reflect.  This does not by any means suggest that I don't care about what's going on, rather that I need to reflect more on how to move forward.

In our overactive and over-stimulated culture withdrawing to pray is often the best thing that we can do--for ourselves, and for those we love and serve.

Regular readers of this blog know that since last October I have been occasionally preaching for a wonderful organization called Unbound.  Unbound was established in 1981 by a group of lay Catholics in Kansas City.  The preaching is to seek out people who are willing to sponsor children, students and needy elders in various poor countries.  I came across this great organization last summer and hope to continue preaching for them in addition to my ministry of preaching missions and retreats.

As we celebrated July 4th yesterday, a day to celebrate our freedom as Americans, I realized that there is a dimension to freedom that is part of Unbound that is often missing in our American discussions about freedom.

When I write on this blog I usually go to Google to seek out appropriate images for my theme.  99% of the time I am immediately successful.  This time when I sought images for freedom I got images such as the one at the top left of this page. They depict individuals being and feeling free.  Something is missing there.  While there is nothing wrong with individuals gaining freedom and feeling free I realized that there is something more to the pursuit of freedom, the dimension of community, of working together for freedom and of helping others to truly be set free.

Unbound takes its name from Luke 11:44.  After calling Lazarus forth from the tomb Jesus says to the gathered crowd, "Unbind him and set him free."  In the part leading up to that Jesus has ordered them to "role away the stone".  The point here is that the liberation from death and the tomb comes from Jesus, but others in the community obey Him to help bring about Lazarus' ultimate freedom.

The work of Unbound has already helped or is helping over 330,000  people to be set free from poverty. When I preach for them I seek sponsors.  The funds raised go to local communities in the various countries.  They, in turn, work with the sponsored people and their families.  it is a community effort.

Our American culture has become very individualistic.  Freedom is about "my rights.While there is nothing wrong with insisting on "my rights" the danger is that my rights and those of others often conflict.  We all quote the Constitution to prove our point, and the beat goes on.

If we can only  realize that the rights of all are best realized when we seek the "common good" and not just "my rights", that sometimes instead of looking only to "my freedom" we can work together to "unbind and set free" someone else would there be the real freedom that we seek.  I believe that when our country has been at its best we have done this.

Maybe the image for freedom, instead of being the individual leaping for joy, could be something like the picture below. 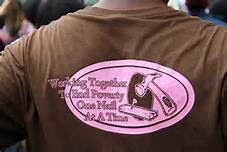