From Sinner and Outsider to Missionary--Accompanied by Jesus 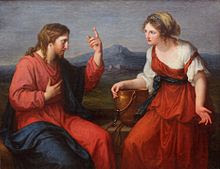 Pope Francis often urges us priests to accompany people who are in sinful or strained relationships with the Church.  This frightens a lot of tradition minded folks because it sounds like just giving in and going along with whatever anyone is doing.

Nothing could be farther from the truth.

In the Gospel reading for the third Sunday in Lent this year (March 19) we find the beautiful story of Jesus' encounter with the Samaritan woman at the well (John 4:5-32).  In this story Jesus offers Himself as a beautiful example of what it means to "accompany".

Jesus takes the initiative.  He breaks social taboo to speak with her and ask her for a drink of water.  This was forbidden on several levels.  First of all Jews did not speak with Samaritans.  Secondly she was a woman.  Men and women to whom they were not married had to keep a respectful distance in public. Jesus, however, breaks both of these taboos.  Also, in asking her for a drink of water He is showing a willingness to receive from her before He offers her the great gift that He has to bring.  He doesn't lead this meeting with confrontation and judgement, but with compassion and  desire to listen. Only after establishing a connection with her does He tell her "to go and get her husband".  When  He finally tells her that she has five husbands she responds with amazement.  She tells her Samaritan friends, "He told me everything I ever did."

I often wonder why she didn't tell Him to back off and mind His own business.  I think that there are two reasons why her reaction was differen:

1.  She was thirsting.  She was in pain and looking for a way out of her difficult life.

2.  More importantly Jesus spoke and gazed upon her with such love that she was able to hear and take to heart His challenging words.   Thus, she was set free and became a "missionary", carrying the Good News to her friends and neighbors.

When we accompany people we are not condoning their bad behavior but rather meeting them where they are at, listening to them, compassionately responding to their pain and then leading them to the truth.  Leading with statements of rules, etc often drives people away.

As for ourselves, for what do we thirst?  Are we open to the compassionate and yet challenging voice of Jesus?