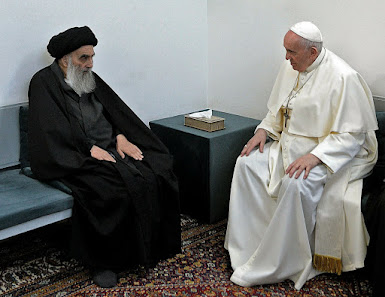 Yesterday Pope Francis met with one of the top Muslim clerics in Iraq.  Who would have thought just a few years ago when Isis was attacking some of the towns that he visited that a Pope would be there at this time.

His Holiness comes to Iraq as a messenger of Peace and as a living witness to the message that he sent out in his encyclical Fratelli Tutti--We are all brothers.

In this historic encounter Pope Francis is visibly affirming what the Second Vatican Council said in its document, nostra aetate dealing with Catholic relations with other world religions.   Regarding Muslims it says, "The Chuch also has a high regard for the Muslims. They worship God who is one, living ans subsistent, merciful and almighty, the Creator of heaven and earth," (Nostra Aetate #3).  At the same time it is also important to note that during his visit the Pope also condemned all "violence in the name of God".

There are too many Christians, Catholics included, who are under the impression that all Muslims are violent and that Muslims worship a different God.  Allah, by the way, is just the Arabic word for God. If you attend a Catholic Mass, or any other Christian service,  in an Arabic speaking country God is addressed as Allah.This visit of the Pope, among other things, calls us to lay aside those misconceptions. Also worth noting, in case you were unaware,Christians, as well as Muslims, have too often used violence in the name of God.