The Church, Justice and Politics 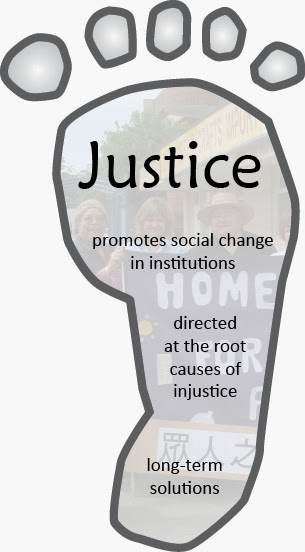 When Pope Francis recently issued his apostolic exhortation entitled Evangelii Gaudium there was an outcry from some circles, especially regarding his statements about poverty, suggesting that he stick to religion and stay out of politics and economics.  The only problem with that lament is that concern for the poor, for human rights, including the right to life, and the promotion of peace in the world is at the heart of what Christianity is all about.  The redemption that Christ brought about is not just the grace to overcome personal sin.  It is also the grace to overcome the injustices of the world.  Both dimensions will not be carried out to completion until the Lord comes again in the fullness of time,  In the meantime however we must try.

Many may be unaware of this fact but every pope since Leo XIII in the late 1800's has made major statements regarding poverty, war, workers rights, etc.

Here in the US some complain that since there is separation of church and state that the clergy should remain silent and stay out of politics.  WRONG!!!  The constitution rightfully forbids the government from establishing an official religion or even favoring one religion.  It also forbids interference with the free exercise of religion.  What is restricted is a church spokesperson favoring a political party or a particular candidate.  It does not prevent a church person from speaking out on issues.  One of the main forces against slavery in the 1800's was the voice of various clergy people.  Unfortunately not enough of those were Catholic, but that is an issue for another time.

Getting back to Pope Francis' statements on distribution of wealth he is standing in a long tradition of Catholic social teaching.  He is not advocating socialism, or some "everybody gets the same" approach to things.  He is lamenting that a very few people hold on to a large percentage of the world's wealth while many others, no matter how hard they work, seem to be left out.  I don't think he, nor any other Church person, fails to understand that some people are wealthier and use their wealth to enable others to work and gain a decent living.

In our own country and elswhere the Church speaks out for the right to life from conception until natural death.   Under that umbrella the Church calls for dignity and respect for all in between the two ends of life.  Over the years Church leaders in our country have spoken out against the nuclear arms race, economic justice and racial justice.  In recent years our bishops have been advocating a reform of the immigration system including a path to legal status for the undocumented.  These stands are taken not to be Democrat, Republican, nor for any other political reason, but rather because these things are what the Gospel demands.

I often tell people that if you are truly Christian you cannot fully embrace being liberal or conservative in the political sense.  Yes, on voting day you have to decide that one party or candidate is more reflective of the things we stand for, but neither is 100% all in.

As for Evangelii Gaudium I recommend a careful study of the document. You will find that it is much more nuanced and refined than the spin given it by both the liberal and conservative media.
at February 21, 2014 No comments: Links to this post

You are the Light of the World