Bless Me Father: Some thoughts on The Sacrament of Reconciliation and the year of Mercy

First of all, dear readers of this blog, I want to let you know that I have not stopped writing.  I have gone through a time of just not knowing what to write about.  At any rate the muses are beginning to speak again and this blog is back in business.

We are now several months into the Year of Mercy declared by Pope Francis, a year, that among other things, is placing, a new emphasis on the Sacrament of Reconciliation. (aka confession, penance) 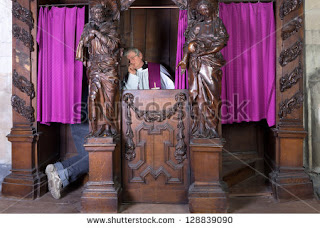 Unlike many my boyhood memories of this Sacrament are positive.  I was never yelled at and no priest ever said, "You did what?"  This is unfortunately not everyone's experience.  I certainly hope and pray that bad memories of confession can be healed and that this wonderful Sacrament can be a positive experience for many.

One moment from my childhood experience of  Confession is related to the first time I attended a night game of the Boston Red Sox.  It was a Friday night. I was invited by some neighbors to the game and was given refreshment money by my parents.  Completely forgetful of what day of the week it was, my friend and I purchased and ate a hot dog. Shortly thereafter we realized that it was Friday.  I felt as though I had committed a sin second only to mass murder.  The next day I went to confession to Fr. Hart, one of the kindest men there ever was.  When I nervously told him what I had done he said, "I hope you enjoyed it. Try to think the next time."  What a relief.

Relief, Freedom.  That is what I pray that everyone might experience with this Sacrament even with matters much worse that accidentally eating meat on a Friday. During the past few weeks, while preaching several parish missions, I have encountered a good number of people who found that freedom, freedom from the burden of guilt carried for a number of years.  As a priest I am humbled by these moments, humbled because they have nothing to do with me and everything to do with the power of Christ working through me.  People do not come to me in confession because my name is John Anglin. They come because in this sacrament they encounter the merciful Christ, the same Christ who forgave the woman caught in adultery and who ate and drank with tax collectors.

In recent years the Church has referred to this Sacrament as the Sacrament of Reconciliation.  I like this terminology because it places emphasis on what is important.  We have called it Confession or the Sacrament of Penance.  Nothing is wrong with those terms.  But, who does the confessing? the penance?  We do.  Who does the reconciling?  The Lord does.

Folks often balk at telling their sins to another human being.  Why?  In self help, 12 step and therapy sessions we do this all the time.  Those are wonderful, therapeutic tools.  In Reconciliation we encounter, through the priest, our merciful Lord.

One last thought is for the ordinary person who has no major sin.  We have gone though a time of questioning the place of confession, especially for such persons.  People say, "After all I am basically good."  That is indeed true.  In the past we perhaps so emphasized sin and guilt that we forgot that all are made in God's image and likeness and that there is an original goodness to go along with original sin. For the ordinary person with no major sins it is still important from time to time to admit that he or she is in need of mercy, that we are not the authors of our own salvation.  One does not have to make up a "laundry list."  One can name ones weaknesses and commit to working especially on one of them.  Most importantly the Sacrament is an opportunity to encounter the merciful Lord.

Maybe you haven't experienced Confession for a while.  In recent years, and especially in this Year of Mercy, various diocese are selecting a day when all churches have their doors open for confession. Make this Lent the time to take advantage of this openness to the gift of Mercy.