Bless Me Father for I Have Sinned 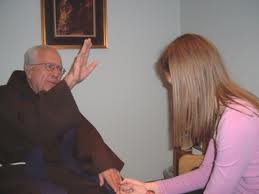 I'm in Fernandina Beach, FL ready to finish up my fourth of five Lenten missions.  It has been a demanding but very rewarding few weeks.  The rewards have come in the form of great attendance, positive response to my preaching and most especially from hearing confessions. Confession is a key component of all of our missions, but especially so during Lent.  I have experienced quite a number of people returning to the Church after long periods away and others who had abandoned the use of confession while still practicing their Catholic faith

While I wouldn't go so far as saying that there is a great revival of the Sacrament of Reconciliation I can say that there is a slow and steady increase in the number of people going to confession.  There are a number of reasons why confession fell into disuse.  One was a decreased sensitivity to sin and a confusion about what was right and wrong.  There was also the unfortunate Catholic sentiment that if a sin is not mortal it's no big deal.  Likewise I think that many people were finding that their confessions were too routine, or that they hadn't been taught to use the sacrament as adults and not children.  Adding to all this we've experienced in recent years a lack of trust in the clergy due to the sex abuse and other scandals, a sort of "Why tell them my sins, they're just as sinful as me.

I think that in the last few years many folks have been searching for direction in life and in so doing are reconnecting with the Church at a deeper level.  One gentleman told me the other day (outside of the confessional by the way) that he was angry with the Church for a long time and still doesn't like some things that are going on but that he realized he was missing something without it.  Others have been burdened by guilt of some terrible things they did and realized that they needed God's forgiveness.  For us priests encounters with them in the confessional are very rewarding and a true cause for rejoicing.  Ever since I was newly ordained I have been strengthened by these experiences and truly humbled to experience myself as a conduit for God's mercy not because I was John Anglin, but because I was a priest.

I am also finding that there are many good practicing Catholics who have started to come to confession more often so that they could grow in their relationship with the Lord, trying to overcome the impatience, anger, frustration, etc that beset all of us.

While I now that good confessors are to be found everywhere I am especially proud that we Franciscans throughout the world have a reputation for being kind and compassionate confessors.   I am proud to be part of that heritage and also challenged to live up to it.

Finally a practice that I have seen develop over the past few years in many dioceses throughout the country is taking a day during Lent and promising that every Church in the diocese will have at least one priest available for confession on the evening of that day.  In my home diocese of St. Petersburg it is called The Light is on for you. Money is spent on TV and newspaper ads and it has met with great success.  I noticed that the Archdiocese of Boston has a similar program.

And so dear blog readers I hope that you will take advantage of the opportunity to go to confession between now and Easter.  I know that I will.
at March 21, 2012 No comments:

My own adventures in standing for peace go back to my seminary days. The Vietnam War was at its height in 1968 and I had gradually become opposed to it.  It was the first time in my life that I realized that I could not stand with the leaders of my country and so together with other seminary students, and many other as well,  I participated in a protest march that ended on Boston Common where we were regaled by speeches from various anti-war leaders of the time.  The speeches contained vitriol, venom and foul language directed at the US government. I left. I was disillusioned.  I knew that I was against this war as a Catholic and as a Franciscan, but I also knew that this kind of angry venom was not the path that I would choose to express my disagreement. The memory of that experience has stayed with me over the years.  I have continued to be opposed to all sorts of military actions of our country, not for political, but for conscientious reasons, reasons related to my faith. I have been dismayed that many war protestors have such a left leaning agenda that they protest vociferously when a Republican starts a war, but not so much when it is a Democrat, though this is certainly not true of all.    It has been difficult for me to find a way to express my views in this regard until I read Paul Moses 2009 publication entitled The Saint and the Sultan.

Using excellent scholarship the author provides fresh insight into the experience of St. Francis of Assisi and war.He makes it clear that after engaging in a horrific sort of civil war between Assisi and Perugia, and later returning to Assisi after being outfitted buy his father to go into battle in a crusade that war was no longer in Francis' heart.

From that moment on Francis became not so much a war protestor, thought there were times when he was, especially later during a crusade where he clearly said that a certain battle was not God's will, but rather a peace maker, one who tried to bring opposing factions together, whether it was Church and civil authorities in Assisi, or the battling social classes of the same town.

His Peacemaking consisted in building bridges.  It reminds me of what the late Cardinal Joseph Bernadin tried to do in the Church, building bridges and seeking dialogue between more liberal and more conservative groups. Later in Francis life he helped to reconcile the mayor and the bishop of Assisi.  The big peacemaking effort of Francis though came at the height of the crusades when he met in Egypt with Sultan Al-Kamil,    Some accounts which were trying to spin this event to please medieval Church leaders portrayed it as a confrontation of religions with Francis challenging the sultan to a kind of trial by fire such as the one portrayed above in Giotto's painting.  A deeper look into sources however shows that while neither succeeded in converting the other both of them came to respect one another as men of God.  Also, unlike some of the crusade leaders at the time, the Sultan was at one point willing to negotiate a peace which would have included giving control of Jerusalem to the Crusaders.   Francis was so impressed with things like the 99 Muslim names for God and the 5 times daily call to prayer, that he composed a list of his own praises of God and inspired by praying the 99 names on a set of beads he and other friars along with the Dominicans began using prayer beads to pray different "rosaries" until our present one took shape.  Also our 3 times daily praying of the Angelus which quickly became part of European culture, was inspired by the call to prayer of the Muslims.

Inspired by Francis I do hope to be a better peacemaker, bridge-builder between all who are divided.  This book also renewed my desire to call for honest and true dialogue between Christians and Muslims.  That, I believe, is how peace can happen