A Call For the Voice of Reason

My good friend and Franciscan confrere, Fr. Philip O'Shea, OFM, PhD, a wonderful friar and a brilliant philosopher, often cited the not well known motto of Catholic education--esse quam videri, loosely translated what is rather than what appears to be.  Catholic education, in spite of some evidence to the contrary, when at its best has led the student to look beyond the surface appearances and make decisions based on the deeper truth which lies behind those experiences.  In other words it called on people to use reason, as well as faith, to make decisions. It called on people to go beyond surface emotions, to analyze the facts, and then to decide.

It seems to me that this motto applies in today's world, be it in the Church or in politics.  I was distressed by the recent Brexit vote where people of the UK voted to leave the EU.  I am not British and there may indeed be solid ground for doing this, but it seems that appeals to fear and anger fueled this decision, and that is troubling.

Here in the US the political atmosphere is an emotional reaction to things that we fear.   CAn we have rational discussions about things like immigration reform or assault weapons control rather than just yelling at those who disagree.

Part of the problem is not just the variety of left and right politicians who play on fear and anger.  A big part of it is the breakdown of the US educational system.  This is not to deny that there are many bright and wonderful students, many of them doing wonderful things.  It is rather the fact that our curricula have become weaker and weaker on the study of the humanities--literature, history, philosophy.  Yes, science and math are vitally important.  They were my strong suit in my younger days, but it is these other disciplines that train our minds to think, to look at the deeper truth, and come to wise decisions.

There is legitimate reason to fear many things in our world today.  There is much about which to be angry.  Let us not, however, let fear and anger consume us.  Let us not let any politician, of any persuasion, manipulate us because of our emotions. Let us pray for wisdom and faith and use the God given gift of reason with which we are endowed.
at June 25, 2016 3 comments: Links to this post

Lord, Grant Us All the Serenity and Courage that We Need! 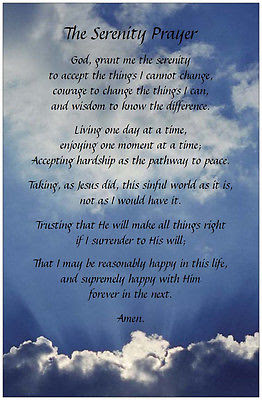 Following the presidential primaries and now the final run to November has been discouraging and disheartening to say the least. On this blog I have refrained from endorsing particular candidates or parties.  I have weighed in on issue and will continue to do so, especially issues that call for a faith response and not a partisan political one.

I find both major candidates wanting.  More alarming is the amount of angry venom that has spilled over into physical violence, but also verbally violent and rude comment, especially in the social media. The electronic media and the press by and large seem content to not only fan the flames, but to pour gasoline on them.

Where are we to go with this?  I suggest a national reflection on the well known Serenity prayer.  A shortened version of this prayer has become popular through AA and the other 12 step programs and has served people well in their goal of achieving sobriety.   The entire prayer, which I have included in the image on the upper left, was composed a number of years ago by Protestant theologian Reinhold Niebuhr.  If you are not Christian and just want to pray to God or a Higher Power, be free to do so. The point is that like the alcoholic, addict or co-dependent our culture, our political debate has become dysfunctional and unmanageable.

The simple message of this prayer is to focus on the things I can change and pray to courageously undertake that change. The real challenge is to accept the things I cannot change.  That doesn't mean that we have to  like the things we cannot change.   The challenge for my readers would be to prayerfully reflect on both of these questions not only in terms of the presidential election, but in terms of all the issues that are affecting our nation and our culture--from politics to education and much more.

One way to avoid this challenge is to play the blame game.  While I'm sure that blame can be cast all over the lot, when we concentrate on blame we tend not to find solutions.  Also being rigidly liberal or conservative deepens polarization.

In the end this prayer is a prayer for Wisdom, the most needed virtue in leading us to where we need to go.
at June 10, 2016 No comments: Links to this post