The Lord of the Dance

I arrived home from Peru, tired but full of joy and gratitude.  I was intending to begin with a description of various aspects of the Unbound program in Peru and I will be doing that in my next entry.  However, as I brought this experience to prayer and reflection another aspect of this trip, a very important one, emerged for me. You see, I encountered the Lord there. He danced with me.

One of my favorite hymns come from a 19th century Shaker community, the Lord of the Dance.  Each line of the hymn basically says that Jesus danced with us at each stage of  His life.  The chorus, however, goes beyond that. It says:

The trip to Peru as one of Unbound's awareness trips.  It is not called a mission trip because the focus is on becoming aware of not only the work of Unbound, but also the realities of the countries we visit.  While in Lima I became very much aware of the work of Unbound and why certain things were done.  I also was struck by the poverty there as well as the contrast of the poorer neighborhoods with the wealthier ones.

Upon returning home I became more aware of the Lord's presence in all of that.  Twice during the week we were treated to presentations of native folk dances.  At the end of those presentations the dancers came and picked out one of us sponsors to dance with them.  Yes, then, the Lord of the Dance
was drawing me in. 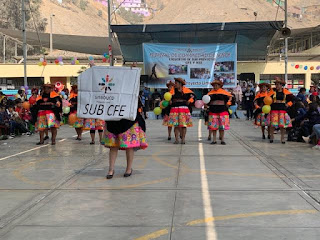 On Thursday of our visit those of us in the group who were sponsoring children in Peru got to meet them.  To say the least it was a great joy to meet 13 year old Anthony whom I sponsor as well as his mother and his 5 year old brother. While I had brought a few small gifts for Anthony I was touched by the fact that his family had a gift for me, a knitted lion that his mother made.  It is a small thing but it expressed so well the love that they had for me.  I encountered the Lord in that as well.


So, as I think back on that week I am so grateful that the Lord of the dance called on me during that wonderful time.

Emmanuel, God With Us