A Blessed Christmas to All 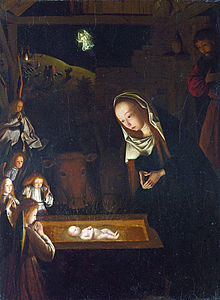 Greetings from my home city of Boston where I'm spending the week with my brother friars at St. Anthony Shrine and visiting with family and friends.  Earlier this morning I read a meditation from Fr. Richard Rohr, OFM, who by the way offers wonderful daily meditations.  Fr. Richard commented on the popular hymn, O Holy Night, compsed in 1847 by Frenchman Placide Cappeau.  He is especially taken by the phrase "and the soul felt its worth."

His thought is that because the Son of God chose to become human, to become one of us, that we see the true source of our worth, a worthiness that is based on a gift given to us, the Incarnation, and not on our successes and accomplishments.   Another spiritual writer, Fr. Ronald Rolheiser, OMI, like to point out that the Incarnation was not meant to be a 33 year experiment that ended with the Ascension, but rather a great mystery that began in Jesus and continues in us.  If we can but allow our souls to feel their worth because Christ continues to act in through and with us, both we and the world would be transformed and we would indeed have Peace on Earth.

I will end by sharing with you a poem, called Sharon's Prayer, composed by John Shea in his 1977 book, The Hour of the Unexpected:

She was five,
sure of the facts,
and recited them
with slow solemnity
convinced every word
was revelation.
She said

they were so poor
they had only peanut butter and jelly sandwiches
to eat
and they went a long way from home
without getting lost. The lady rode
a donkey, the man walked, and the baby
was inside the lady.
They had to stay in a stable
with an ox and an ass (hee-hee)
but the Three Rich Men found them
because a star lited the roof
Shepherds came and you could
pet the sheep but not feed them.
Then the baby was borned.
And do you know who he was?

Her quarter eyes inflated
to silver dollars,
The baby was God.

And she jumped in the air
whirled round, dove into the sofa
and buried her head under the cushion
which is the only proper response
to the Good News of the Incarnation.

Merry Christmas to All

To enjoy Cappeau's beautiful hymn just click on below